Roll with bamboo straws because of the passionate environmental love

Sharing with VietNamNet, Mr. Nguyen Van Mao - the owner of a well-known enterprise in the bamboo straw production industry - said that the trend of using bamboo straws is increasing gradually through the company's orders every month.

Starting to develop the company in September 2018, but by March of this year, his company's revenue began to skyrocket when some European countries banned the use of plastic straws. 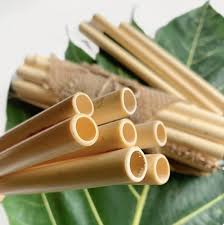 With 5 factories located in Dong Nai, Gia Lai, Nghe An, Hanoi and Buon Me Thuot, now his company produces nearly 10 million straws every month. In the lowest months, the revenue is about 5-6 billion dong, the highest point is 13 billion dong / month.

However, up to 98% of goods are exported to France, Germany and India, of which India accounts for 70% of exports. Despite seeing an upward trend in the domestic market, this figure only accounts for 2%.

However, Mr. Mao believes that this number will tend to increase steadily in the future due to the increasing awareness of environmental protection and consumer health protection.

Besides bamboo straws, the market for environmentally friendly straws also has a line of grass straws made from naturally grown reed and reed grass.

Huynh Van No - the founder of a brand of straws - is a tour guide. 5 years in the tour industry, No is known in developed countries, disposable plastic straws are not allowed to use. Meanwhile, according to his calculations, a group of 30 guests in Vietnam discharged about 300 bottles of plastic water into the environment for each 5-day 'tour'.

From that fact, No came up with the idea of producing straws not from a business perspective but from the perspective of a person who is passionate about environmental protection. Just started producing straws for 4 months, production at his facility has only reached a modest figure, but the quality of the product has been certified to export standards to the US and Europe.

He also found that his straws are relatively exclusive in the developed countries' market because the characteristics of Indian almond and reed grass are only grown in Southeast Asian countries. Therefore, foreign customers are very excited with this product.

'The downside of the grass straw is that it can only be used once, but reed and reed grasses are regenerated, grow faster than bamboo - about 8-10 months compared to bamboos from 1.5- 2 years' - No said.

Currently, straw straw brand Teo Straw has been exported to Singapore, Taiwan, and Germany. No's monthly turnover ranges from 60-70 million / month - equivalent to more than 100 thousand straws. He plans to expand and expand the scale to about 1 million tubes / month in the near future.

As an active member of environmental organizations, the owner of the brand of straws said that this is a potential market and a trend to spread. However, due to the large amount of labor required, the price of grass straws is now much higher than plastic straws. Therefore, the potential market that he aims at is overseas and luxurious restaurants, hotels and resorts.ư

He hopes that when the people's awareness of environmental protection is improved, this product will be selected and widely popularized with popular customers.