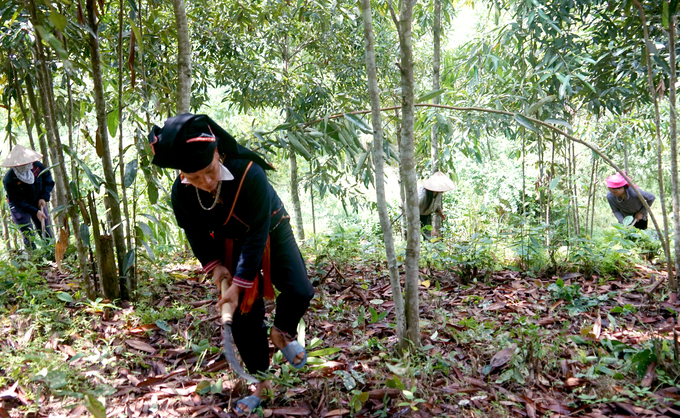 Phong Du Thuong commune has more than 2,000 hectares of cinnamon planting, trees over 5 years old, about 7 meters high will be harvested. In addition to bark being the main product, stems and leaves are also used to distill essential oils. "My family planted about 10 hectares of cinnamon, giving an annual income of about 300 million. In the mountains, cinnamon planting is the profession with the highest economic efficiency," said Dang Thi Nghien in Village 7, Phong Du Thuong Commune.

People use sickles to measure about 50 cm of each shell. Each mature cinnamon bark is peeled from 12 to 15 kg.

Cinnamon is dried in the sun. If it is not sunny, people can use cinnamon drying machine with the temperature from 70 to 75 degrees Celsius for about 10 hours, when cinnamon sticks about 13% of water is satisfactory.

Fresh cinnamon of the people is purchased from the root, then transported to the factory for processing.

Mr. Lo Van Manh, Chairman of Phong Du Thuong Commune People's Committee, said that since 2017, the locality has started to develop organic cinnamon growing model to meet export criteria to the US and EU markets. "Here, cinnamon growers earn on average a few hundred million dongs a year, some earn up to billions of dong, build tall buildings and buy cars," Manh said.

Representative of Swiss Hevetas organization (specializing in developing organic agriculture) said that in recent years, this organization has participated in guiding the local people how to grow organic plants that meet export standards. fastidious. "Vietnam has great potential for organic crops for economic development," he said.

Three sizes of finished cinnamon are 3 cm, 5 cm and 7 cm. "Cinnamon pieces that have been broken or broken will not be removed because the export products require very high aesthetics," a worker said.

Workers choose beautiful designs of cinnamon packaged in packages. Each 1 kg pack of dried cinnamon exported to the US market, the EU will cost about 6 USD.

Time from harvesting to packaging cinnamon products is about 10 days.