India, the world's largest exporter of processed raw materials, has been forced to ban onion exports after a long rainy season in the country has forced onion cultivation back in the summer. This became a 'nightmare' for many housewives due to scarcity and soaring prices. 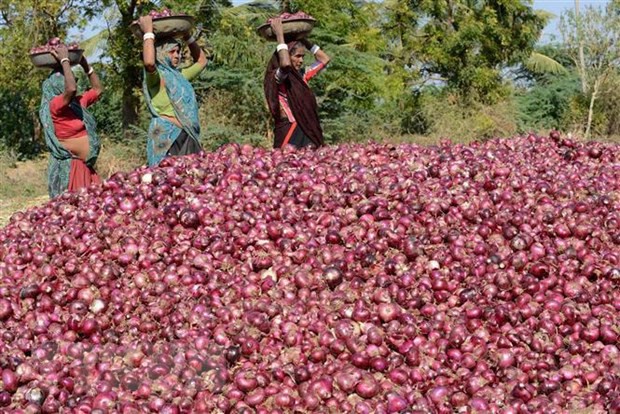 The Indian government has issued a ban on the export of onions across the country since September 30, after the price of this material in local growing areas increased to 63.3 USD / 100 kg, the highest level in nearly 6 years. The reason is that unusually prolonged heavy rains prevent onion-planting households from planting in the summer.

In the face of domestic scarcity, India was forced to import onions from Egypt in order to curb rising prices of onions. However, Ajit Shahm, president of the Indian Association of Onions Exporters, said the measure was ineffective due to the passing of domestic onion cultivation in the summer, and the ban could be maintained. until mid-November.

India's cessation of onion exports has forced many countries such as Bangladesh to look for other sources from Myanmar, Egypt, Turkey and China to reduce domestic prices. According to India's Agri-Food Export Development Agency, in 2018-2019, India exported 2.2 million tons of fresh onions, accounting for more than 50% of total onion imports. of Asian countries.

Many traders in Asian and European countries have taken the opportunity to increase onion prices. In the capital, Dhaka, Bangladesh, housewives spent $ 1.42 to buy 1 kilogram of onions, twice the previous two weeks and the highest level since the end of 2013. Onions in Sri Lanka also by 50% within 1 week, to USD 1.7 / kg. In response to this crisis, the Bangladesh Government had to apply the price subsidy policy through a state-owned company, and attempt to import onions in the shortest possible time. According to Bangladesh officials, shipping from Egypt takes 1 month, from China takes 25 days, while from India takes only a few days.