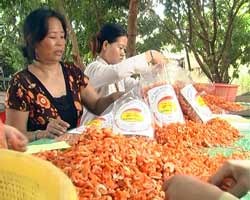 Back to Cau Ngang at the end of the year, the atmosphere of dry shrimp production is busy from morning to evening. Mr. Pham Van Danh, Deputy Chairman of Binh Minh Dry Shrimp Cooperative, said: “For nearly 2 months now, the cooperative has to work overtime to keep delivery to customers in Ho Chi Minh City, new customers in the East, Mekong Delta provinces and European customers. ”. Vice Chairman of the People's Committee of Vinh Kim Commune Tran Van Tau pulled us to the fields of Ca Tum - Cha And with hundreds of hectares of land showing: Many people said, this is a "heavenly" product for the people of Vinh Kim sea.

From silver shrimp, Vinh Kim people make delicious dry shrimp to famous at home and abroad. He regretted: “This year, the rice fields of Ca Tum- Cha Va were severely damaged due to the pest epidemic, so the shrimp crop was lost. Not only Vinh Kim, neighboring areas such as My Long Bac, Kim Hoa, My Hoa, Hiep Hoa ... the production of silver-shrimp land has also decreased. Unseasonable but excited by dried shrimp are winning prices.

According to the elders recounted, thanks to the favorable nature, Vinh Kim field is located between 2 estuaries of Co Chien and Cung Hau river, with the ideal ecological environment "6 sweet months, 6 brackish months", which is a good condition for silver-earth shrimp to breed and grow. Fresh water for rice cultivation, brackish water for shrimp farming, therefore, the profession of dry shrimp farming in Vinh Kim is constantly growing.

Ms. Tran Thi Kham, 70 years old, one of the people who initiated the dry shrimp farming business said: “Before the liberation, the people of Vinh Kim made dried shrimp, but only to eat in the family and for guests. Feel good, many people come to buy, expand and become a trade village. ” Up to now, there have been more than 30 professional dried shrimp production establishments. In fact, the Mekong Delta has many places for dry shrimp production, but not as good as Vinh Kim.

The special thing of Vinh Kim dried shrimp is made from natural silver-colored shrimp, bright red color, rich sweetness ... If preserved well, you can leave the whole year without losing color or losing flavor.

From the 10th lunar month onwards, the full moon and thirty are the "festivals" of silver-gray shrimp to the field. 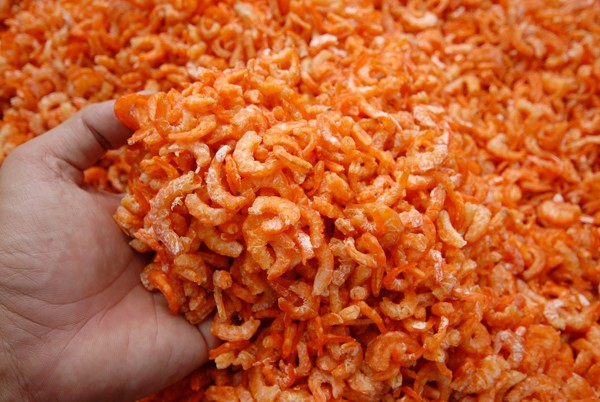 For the dried shrimp village to grow, the People's Committee of Cau Ngang district has built a brand of Vinh Kim dried shrimp from the past 2 years. In parallel, the marketing promotion step has been promoted, bringing dried shrimp into the system of big supermarkets and expanding exports to other countries ... Each year, the establishments produce about 1,600 tons of dried shrimp, over 30% for export. Many overseas Vietnamese and foreign tourists commented: Vinh Kim dried shrimp is an indispensable favorite dish in festivals, death anniversaries and New Year.

Mr. Le Thanh Thai, Chairman of Cau Ngang People's Committee, is optimistic: “The expanding domestic and foreign market is praiseworthy. The district is planning 5,000 hectares specializing in rice and shrimp farming, and has a long-term strategy in terms of capital, technology transfer, production linkage ... to improve the dry shrimp quality of Vinh Kim. That is the pride of Tra Vinh ”.